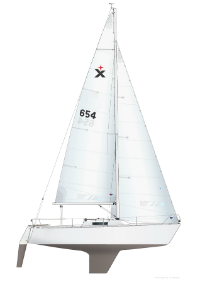 The Albin Express is a small racer, offering high performance sailing with basic accommodation. The design was conceived as a small racer that could also be cruised around the coast.

Albin Express, or just Express is a sailing boat that is built of GRP with an aluminium rig. The boat is popular in Sweden, Norway and in former Yugoslavia. It was produced by Albin Marin in Kristinehamn from 1979 and onwards.

The american J/24 was in victory lane in USA and Albin Marin in Kristinehamn was close to bankrupcy. They considered producing J/24 on licence from USA but decided to create their own boat with the assistance of yacht designer Peter Norlin.

Expressen was created and quickly became very popular. The boats were delivered without a completed interior that instead was assembled by the buyers. The boat has had a big boost in popularity in Norway and the Norwegian Nationals gathered more than 100 boats in 2014.