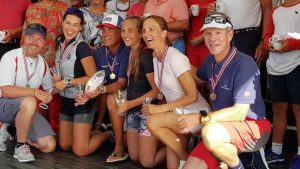 As with all the previous Norwegian Championships in the Killing class, it all came down to a family affair with Team Baghdad family members filling up the bulk of the top finishes. Kristoffer and Karmen Spone went to the top during Nationals in Killing at Hankø. Thus they broke another family’s victory series.

43 boats on the line in Killing-Nationals at Hankø. Kristoffer and Karmen Spone, which thus moved from the silver medals they won in 2017 in the same class. They won four points over the champions of last two years, Peder Nergaard and Caja Basberg.

Obviously being pleased to be at the top of the podium with his daughter Karmen, Kristoffer Spone said:

I said that to Karmen before the last race, we have to watch out for Kristian and Nini, they will never give up! Thus the older ones pulled the longest straw this time, but the young sailors Christoffer and Linus sailed very well

On the podium, the two have stood before this year when they took bronze under Snipe-NM, and Kristoffer is already Norway’s champion in Melges 24.

With his NM gold, the Spone family broke the Nergaard Gold Hegemony family in the Killing class. Ever since the class got its renaissance in 2010, there has been a Nergaard at the top of the podium.