Finally they won the Kings Trophy 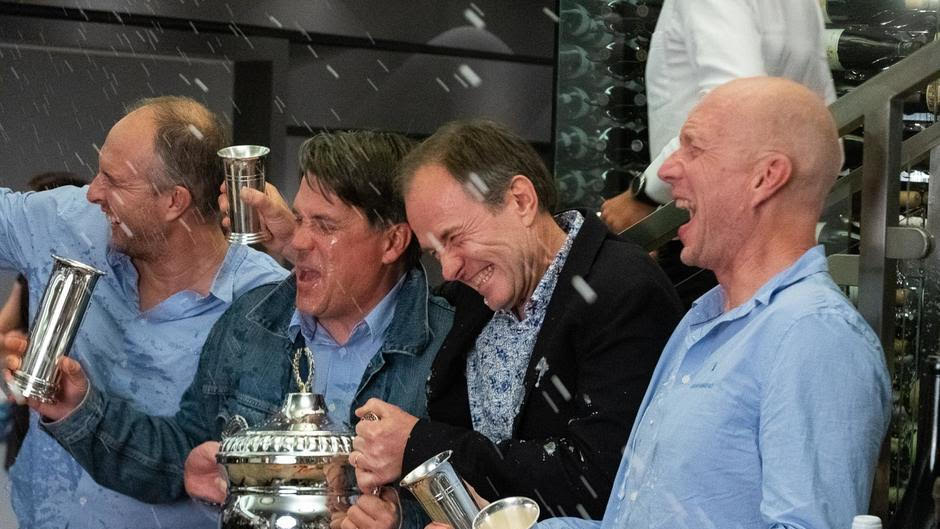 As translated from seilmagasinet.no and Morten Jensen:
Kristoffer Spone, Christen Horn Johannessen, Børre and Sigurd Hekk Paulsen has won a lot in their career, but never the Kings Trophy. Saturday, October 13, the curse was broken.

Nobody has won more Norwegian Nationals medals than Kristoffer Spone, but he lacked the Kings Trophy – and it has almost ridden him like a mare in recent years – and it has become a talk in sailing Norway; would Kristoffer Spone ever win the Kings Trophy ?. Several times they have been on the verge of winning it in the championship champion, but on several occasions it has missed completely in the final phase.

This year, they were more dedicated and focused than ever when they started the first race in the Championship Champion, in Åsgårdstrand Friday and Saturday – 12 and 13 October.

We had as a plan to sail conservatively in the opening round and in the semi-finals. We did not want to take any chances that would mean winning or disappearing – especially disappearing, says Kristoffer Spone.

And that recipe worked. The team made it safe, but in the final they met the best sailors Norway has to offer. The opening round and semifinal offered changing and challenging conditions.

In the semifinal there were last year’s champions, Jostein and Asbjørn Grødem, Karen Kristoffersen and Trym Markussen, who scored by winning two of the three sails. Ten teams sailed semi-finals – the six best after three races went to the finals.

The Grødem team had barely advanced from the opening rounds – in the semifinal they really woke up and sailed up as one of the favorites.

In the final, the Melges team was eager to win races.

In the finals, we had as a plan to “go all in “to win starts and races. Then there was no question of securing us in any way, said Kristoffer Spone.

The other teams qualifying in addition to the title defenders and the Melges team were Finnjolle team with Anders Pedersen, Thomas Nilsson, Pål and Espen Tønnesson, the ORCi team who won NM at Karl Otto and Maren Magda Book, Stian Østlund and Aage Hedegaard- Larsen, The National team with Hermann Tomasgaard, Mathias Mollatt, Nicholas Fadler-Martinsen and Saskia Sills and 29er team who won both NM and Junior World Cup at Mathias Berthet, Alexander Franks-Penty, Jacob Undrum and Jostein Aker.

The first race of the finale ended with a victory for the Melges team. In second followed the ORCi team in front of the title defenders and the national team. Everything seemed to go the way for Spone & Co.