Artemis XIV strikes back to take lead in Gold Cup

(from 5.5class.org) “Welcome to sunny Cowes,” they lied 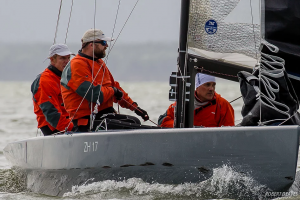 . “Due to bad visibility there will be a support boat with its navigation lights on half way up the course.” So began the second day of the Scandinavian Gold Cup at the Royal Yacht Squadron in Cowes. After losing Wednesday’s race by less than a boatlength Artemis XIV, NOR 57, (Kristian Nergaard, Kristoffer Spone and Trond Solli-Saether) struck back on Thursday with two race wins, despite nearly not making it to the start line, to take a 2:1 lead against Marie-Françoise XIX, SUI 218, (Jürg Menzi, Jurgen Eiermann and Bo Selko).

The second day of racing started with proper English weather with non-stop rain, dropping temperatures and a stiff south-westerly of about 15-20 knots. It was proper foul weather and it was going to get worse before it got better. The first attempt at Race 2 ended with an abandonment at the first mark following a 60-degree windshift that left the fleet unable to hoist spinnakers on the downwind.

After a short delay a new course was laid with the top marks now set towards Southampton. However, during the race the wind started to shift back to the south and also dropped to 1-2 knots, with nothing but the sound of raindrops on the water to keep the sailors company. The tide was also running fast catching out many unwary sailors who misjudged laylines and marks.

Marie-Françoise XIX had a useful lead at the top of the first beat, which was already becoming skewed, but on the second upwind, Artemis XIV sailed more inshore and popped out in the lead for the next four legs, which by now had become procession of one tack beats and tight reaches. Artemis XIV crossed ahead to level the score against Marie-Françoise XIX.

For the second race, the rain had eased and the wind was starting to come back, albeit slowly. The first few laps were slow progress with Artemis XIVagain finding the best course out of the tide to lead all the way and build a substantial lead at one point. Marie-Françoise XIX never recovered and trailed round in last. It was now 2:1 up for Artemis XIV and only those two boats now progress into Friday. Artemis XIV needs just one more win, while Marie-Françoise XIX needs two. To paraphrase a famous quote, there is no second.

Nergaard commented on the racing:

The first race was about getting all the way into the beach out of the current and the Swiss guys did a really good job on the first beat and were quite a way ahead of us on the downwind but on the second upwind we chose the left hand mark and went low to the beach and they seemed to be stuck in more current further out so we sailed through to leeward a and were ahead at the top mark. After that it was pretty much a reach back and forward. In the last two beats there was no tacking as the course was skewed. But it was a close race. We didn’t know if there would be a problem with the time limit but we were okay.

The second race started in 5 knots and we figured it was about getting out into the current as it was going the other way by the time. We had a good start at the oin. Everyone was pushed over the line but we came from below and were OK and got a couple of shifts and were ahead all the way.

He said the current was crucial, but you could not ignore the wind.

Also we saw the guys that went low closer to the land on the downwind, did better. It was really a matter of playing the current but you cannot forget the wind as well. You need to try to make a choice and play both.

On building a big lead in the second race:

We find if we cover and be defensive, it doesn’t work around here for us so we figured we should be aggressive and believe in what we thought was good and I think that is why we extended.

He explained they nearly ddn’t make the first start.

After having a little crash(with a channel marker) and a little breakdown with the block on the jib sheet, we are happy to get through the day with two wins.