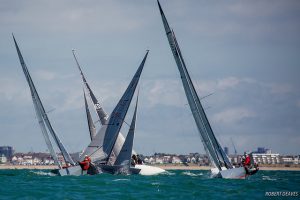 The conditions might have been different between the two races but the recipy to success were the same. From the light condition in first race of the day to the medium breeze in the second, start positioning and picking your 1st upwind side was the important key. Team Baghdad did not succeed in that and pay the price dropping in the overall standing after two results, well below their normal standard.

It changed between left and right side and we just did not hit the right one on the first beats. Also a bad start in the 2nd race of the day did not make things easier, explains Kristian Nergaard. We will not give up that easily and will try hard to turn the tables.

The overnight leader at the 2018 International 5.5 Metre World Championship at the Royal Yacht Squadron in Cowes, John B, BAH 22, (Gavin McKinney, Lars Horn-Johannessen, Mathias Dahlman) extended her lead after a first and a fifth on the third day of the five-day regatta. A win for Marie-Françoise XIX, SUI 218, (Jürg Menzi, Jurgen Eiermann, Bo Selko) moves her up to second, while the most consistent performance of the day from New Moon, BAH 21, (Mark Holowesko, Christoph Burger, Peter Vlasov), with a second and third, moves her up to third.

Wednesday’s forecast was almost a repeat of Tuesday, but was very different on the water. The racing finally got underway in just 5 knots from the south-west after more than an hour postponement on the water waiting for the promised wind. It fluctuated between 3-5 knots for the first race before slowly clearing skies heralded the expected 10-12 knots that arrived for the second race.

Race 4 was all decided just out of the start. The right side was the place to be with Black & White, SUI 219, (Daniel Schenker, Mark Dangel, Anthony Shanks) first out of the blocks and initially winning the right group. However then John B was gifted a line of pressure and a shift and sailed through everyone, tacked and was gone. The race for second was on. The wind dropped to less than four knots at times, but the right side continued to pay.John B sailed away to build a lead of more than two minutes. Black & Whiteheld off strong challenges from New Moon and Clark Kent, NOR 64, (Petter Fjeld, Peter Hauff, Christen Horn Johannessen) to remain in second. New Moon moved into third on the final upwind. As the fleet sailed the final run, the breeze finally built to set the scene for a great second race.

Marie-Françoise XIX got a great start at the pin end in Race 5 and was soon leading the group back across to the middle. The front of the fleet was very close as the wind picked up to 10-12 knots with the sun finally breaking through. Marie-Françoise XIX rounded first from New Moon and Black & White. With fantastic racing and sailing right through the fleet, Marie-Françoise XIX maintained her lead throughout, holding off New Moon in second. However Black & White got a little lost on the final upwind to drop to sixth, while Caracole, SUI 214, (Bernard Haissly, Nicolas Berthoud, Daniel Stampfli) moved up to third.

Overall leader John B recovered from a deep first mark rounding to cross in fifth, taking several boats on the final upwind, to extend her lead to six points,Marie-Françoise XIX and New Moon in second and third are separated by a single point with four races left to sail.