Team Baghdad 2 back at the top in Melges 24 champs 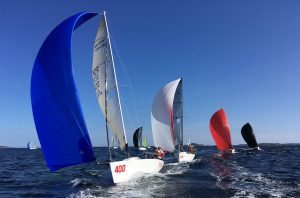 It’s been 15 long years since last winning the Melges 24 National Championships but this year Team Baghdad 2 were back at the top. After several Silver medals they were back in Gold. Not only did they became Norwegian Champions, the regatta also counted as Nordic Championships.

The regatta gathered a record fleet of 40 boats and it all came down to the very last race but with a 4th place there, Baghdad 2 secured the title with 6 points to spare.

Yes, it was great to finally win here. Then we are one step closer to our main goal: to win the King’s Cup says helmsman Kristoffer Spone.

That trophy is the prize for winning the Champion of the Champions in Norway later this year.

Unfortunately, Baghdad 1 was not in similar form. Despite a nice win in the very last and windy race, the team ended up on 7th place.

Kristian Nergaard on Baghdad 1 sums it up as: At this stage we’re not good enough to score better.

← Father and son win in Denmark
Team Baghdad on top of the table in stellar Hankø conditions. →